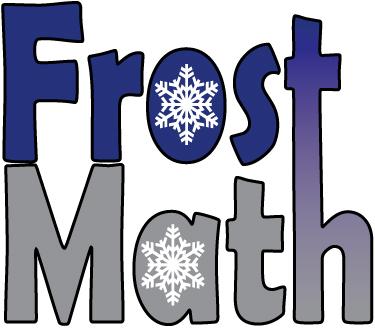 "I began attending FrostMath in fifth grade, and every single class that I have attended in my 4 years has posed challenging topics and questions to me. I have learned so  much from the program, enabling me to make nationals twice. The questions on every test are not only made to mimic the real tests, but are made to be a lot more challenging. After taking these test under real conditions so many times, I could be more acclimated during the real test as I had a general sense of how I was doing. Mr. Frost would walk around every class guiding people through problems they didn’t understand how to do, letting them “discover” how to do it. Both this and Mr. Frost’s dedication to both FrostMath and Mathcounts are what sets him apart from most other coaches and teachers. Without him and FrostMath, I would have never achieved anything close to the successes I have had."

"My first year of MATHCOUNTS, I did not make it to states. After a year with FrostMath and Mr. Frost, I qualified for states. Then taking a second year of FrostMath, I made it to Nationals.
FrostMath has helped me immensely in MATHCOUNTS preparation, and also taught me many concepts and methods that are useful in other math competitions as well. Not only are the questions written exceptionally with fitting difficulty, but each one also encompasses a different topic commonly covered in MATHCOUNTS. Learning to master these questions helped me out greatly in speed and accuracy.
The atmosphere in the room is never stressful but still provides the intensity of an official test. The simulation of the real test, including the formatting of the test and timing, allowed me to feel more comfortable taking the actual competition, after having worked with it so many times.
Mr. Frost himself is both encouraging and kind, always willing to help me and everyone else whenever we have questions about a problem.
Overall, FrostMath has provided a great mathematical environment and abundance of materials for me to improve in MATHCOUNTS and math in general."
Angelina Z. 2nd place at MA State

"I began MATHCOUNTS in sixth grade, scoring only a 32/46 on the Chapter level. The following week, I attended my first FrostMath class, and immediately found myself challenged. Over the year and a half of classes I attended, I was exposed to many different types of MATHCOUNTS problems, written by Mr. Frost himself, and my scores improved dramatically. This year, after doing FrostMath for a year, I aced Chapter MATHCOUNTS and placed 8th in the state. I certainly owe a lot to Mr. Frost for my improvement.
When I had an extremely unfortunate incident with MATHCOUNTS, originally being incorrectly told that I was going to Nationals when I actually wasn't, Mr. Frost made it up to me by inviting me to two training lessons with the real Massachusetts National MATHCOUNTS state team. It was a very kind gesture on his part, and I learned a lot from the lessons.
I would highly recommend FrostMath for anyone with a basic pre-algebra math background who just wants to learn more math. It is a rewarding experience and has been a major reason why my math has improved in the last year and a half. Thanks Mr. Frost!"

“Everything, from the environment to the teacher, was amazing in my opinion. The practice tests made by Mr. Frost were awesome. Every aspect of it such as the time allotted or the seriousness would be like the real competition. They were harder than the real MathCounts tests, but I learned so many new tips and tricks from them.  Mr. Frost was, of course, an amazing teacher, and he would walk around answering questions. He wouldn’t just give you the solution. He would guide you through it in a motivational way. These classes bridged the gap between Middle School math and MathCounts math for me. Altogether, winning top female in MA two years in a row and getting 5th place at state in my last year did not happen magically. FrostMath provided a wonderful environment to improve my math skills, and of course, a source of extra practice. I only wish I had heard about FrostMath earlier, as I’m confident I would have done better with an extra year of preparation.” - Shreeya R. 5th place at MA State MATHCOUNTS 2015

"Ever since the start of sixth grade, I constantly took FrostMath classes to prepare for MATHCOUNTS. Good practice tests are both extremely desired and hard to come by, and I am thankful that through FrostMath I had the opportunity to take over 50 high-quality MATHCOUNTS practice tests. Not only do the problems perfectly simulate those that would be found on real MATHCOUNTS tests, but the test’s format and the testing conditions are very similar to what would be seen in a real MATHCOUNTS competition, making the practice tests more realistic. When someone asks Mr. Frost for help, he gives them small hints that allow them to discover the majority of the solution on their own. Without FrostMath, I doubt I would be anywhere near as successful as I am today."

"As parents of a 3rd grader and a 4th grader, although we had heard so many great things about Mr. Frost, our kids were still too young to take FrostMath. Luckily last Fall, Mr. Frost started to offer younger kids problem sets and we registered immediately. The problems were deliberately prepared. My kids started to feel the joy of thinking through and eventually solving a problem by themselves. They got great exposure on what MATHCOUNTS would be like. Each class, they were able to take home some new knowledge points that Mr. Frost taught them. Mr. Frost is very nice and kind to the kids in class, but he is also very strict. My kids learned from him that they should be serious about math and the learning opportunity. Indeed, maturity is always an important part of education, be it for competition or not. Dealing with younger kids would clearly require more effort from Mr. Frost—as parents, we truly appreciate his help to our children.

We had never thought of sending kids to competitions like LMT—no doubt, they would have been the weakest competitors. But one day, the kids came home, very excited, asking us to register them for LMT. They said that Mr. Frost recommended it. Then we went, and the kids tried the tests—it turned out to be a perfect learning experience for them. They didn’t have any pressure since most other kids were older, but they took the challenge and they even became obligated to practice all the problems again at home! FrostMath created the environment and atmosphere of serious math learning. Our kids observed how the older kids—including the MATHCOUNTS strong competitors—worked on math problems. Working hard, being honest and strict on each math fact, are all good influence for them. We hope to stay with FrostMath for the rest of kids’ elementary and middle school years. We hope that the kids will discover more colors and wonderful things in the math world with the help of Mr. Frost."